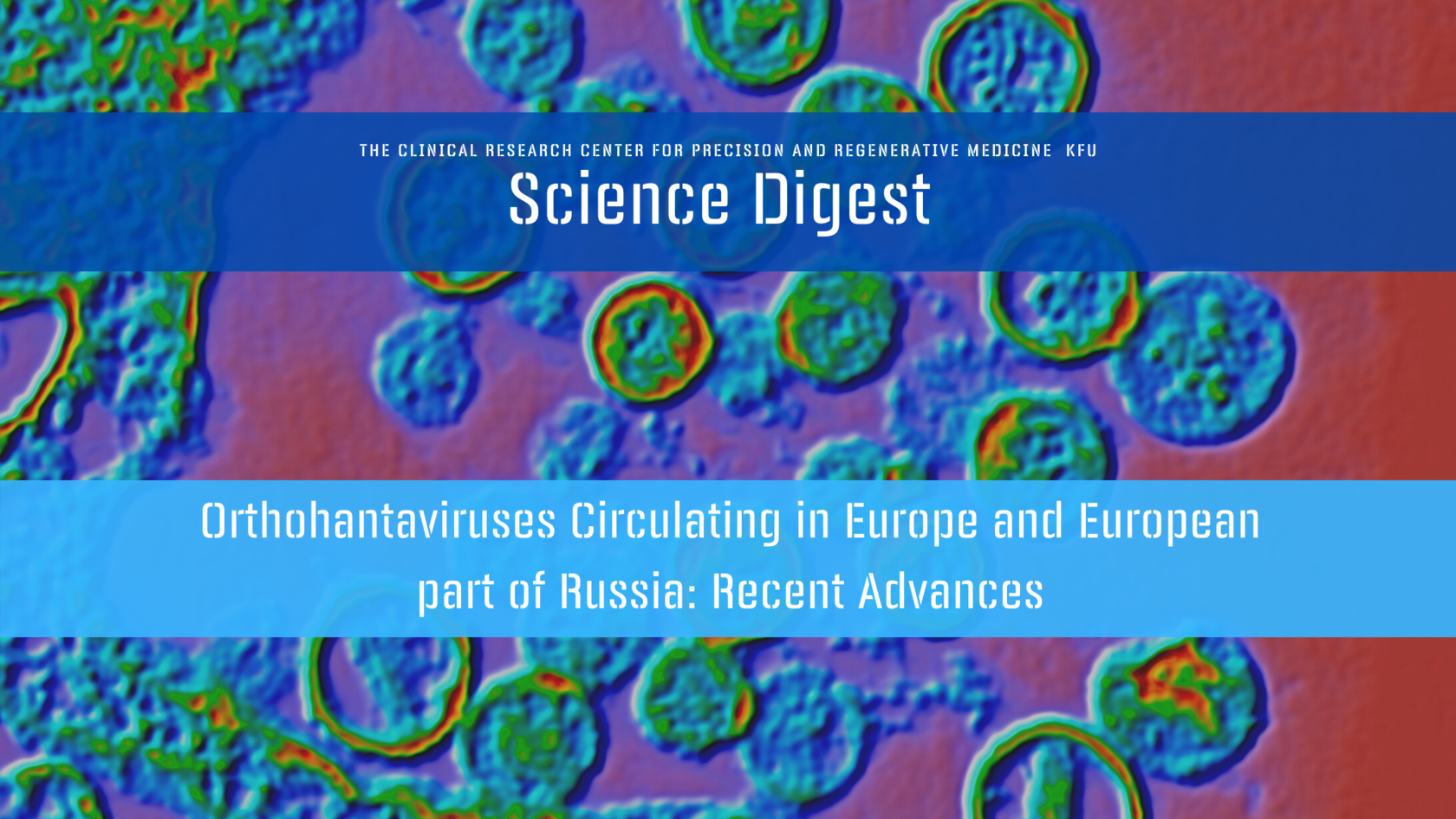 Orthohantaviruses are enveloped spherical viruses, 80–160 nm in diameter causing haemorrhagic fever with renal syndrome (HFRS) in Europe and the European part of Russia. More than 30 species of this orthohantavirus genus have been reported where Hantaan (HTNV), Seoul (SEOV), Puumala (PUUV), Sin Nombre, Andes, and Dobrava-Belgrade (DOBV) were shown associated with the human disease. Sin Nombre and Andes are endemic in the Americas, while HTNV and SEOV are mainly detected in Asia, with many cases documented in China and South Korea. PUUV and DOBV are endemic in Europe and European part of Russia. It is important to note that in Europe, DOBV is known to be the most pathogenic virus to humans.
Several studies reported the circulation of PUUV orthohantaviruses in Europe and the European part of Russia. PUUV infection is referred as nephropathia epidemica (NE), a mild form of HFRS. Human become infected by inhaling virus contaminated aerosol or direct contact with infected rodents or their excreta.

Recent studies reported the presence of orthohantaviruses and their reservoir hosts in Europe. In Germany, the Charité - Universitätsmedizin Berlin became the first to establish an animal-to-human transmission of SEOV. The team of researchers in collaboration with their colleagues from Friedrich-Loeffer-Institut (FLI) isolated the orthohantavirus from an 18-year woman and her pet rat. Isolated viruses had an identical genome and they were identified as SEOVorthohantavirus. These results stand as a milestone that can change the way people handle both wild and domesticated rats. The collected data were published in Emerging Infectious Diseases Journal.

Novel orthohantavirus found in the root vole in Lithuania

In study conducted by Prof. Dr. Rainer G. Ulrich and his team working in collaboration with experts from Switzerland and Lithuania developed an RT-PCR molecular diagnostic technique and screened 234 samples of Microtus voles from Lithuania for orthohantaviruses. In Lithuania, both PUUV and DOBV orthohantaviruses have been commonly detected in humans and rodents. However, circulation of other orthohantaviruses remained largely unknown. By analyzing the S segment using RT-PCR technique, the researchers were able to identify a novel orthohantavirus in eight of 79 root voles (Microtus oeconomus). The new virus was named "Rusne virus" based on the location where these rodents were captured. Researchers obtained the partial S and L segment sequences of Rusne virus, which they aligned and compared to other viral sequences from Asia and Europe. Surprisingly, Rusne virus sequences had high similarity to Tatenale and Traemmersee orthohantaviruses and clustered with Kielder orthohantavirus on the phylogenetic tree. Authors emphasized that it is important to continue investigating the root voles and other rodents in order to evaluate the host association of Tatenale, Traemmersee, Kielder, and the novel Rusne orthohantaviruses.

Puumala Orthohantavirus can switch the host

When the rodent population peaks in the habitats, virus reinfection, and infection of rodents, and spill over between different small rodent species could occasionally happen, adding to virus evolution. Prof. Dr. Rainer G. Ulrich and his colleagues captured 1459 species of rodents and analysed the effect of bank vole population dynamics on frequency of the detected PUUV S segment. Also, the researchers tested presence of the spill over infections of PUUV in different rodent species. The team leader, Prof. Dr. Rainer, explained that viruses are carried by specific hosts, where, in the case of PUUV, it is the bank voles. Out of all bank voles tested for PUUV, 27.9% and 22.3% were positive for PUUV-reactive antibodies and PUUV-specific RNA, respectively. Surprisingly, one PUUV positive rodent was a field vole, demonstrating the spill over event. Analysis of the obtained non-structural protein amino acid and nucleotide sequences showed a high level of diversity.

Multidirectional migratory of bank voles in the Pre-Kama Area of the Republic of Tatarstan, Russia

In Russia, PUUV is the most common orthohantavirus causing NE in humans. The Volga Federal District is endemic area for NE, where hundreds of cases are registered annually. Currently, an active research on PUUV infection in humans and this virus circulation in rodents is conducted at the Research Laboratory OpenLab of «Gene and Cell technologies» scientific-clinical center for precision and regenerative medicine, Kazan (Volga Region) Federal University. In a recent study published in Pathogens, the researchers have investigated the genetic variability of PUUV in Pre-Kama region of the RT. From 26 PUUV-positive samples collected from small rodents captured in the Pre-Kama region, the partial small (S), medium (M), and large (L) genome segment sequences were obtained and analysed. It was shown that some of the sequences obtained did not correlate with the geographical location of the trapping site. Also, reassortant strains were identified where S and L segments were from one parental strain, while the M segment was supplied by another. In the words of the authors “this pattern of the PUUV genome could be the result of a series of successive multidirectional migratory flows of the bank voles to the Pre-Kama region in the postglacial period”.

In another investigation of orthohantaviruses and rodent reservoirs in Eurasia, the group of researchers fromthe Research Laboratory OpenLab of «Gene and Cell technologies» scientific-clinical center for precision and regenerative medicine, Kazan (Volga Region) Federal Universityreported that the geographical location and migration of the natural hosts can lead to the orthohantaviruses genetic diversity as the rodents adapt to the new environment. Also, high level of diversity of the PUUV genome was found. The high genome diversity was mainly represented by point mutations and reassortment. However, it still remains unclear whether this diversity is linked to the disease’s severity. The authors asseted that “research into this virus genus is of great importance as its potential as an emerging infection has been demonstrated throughout Europe”.